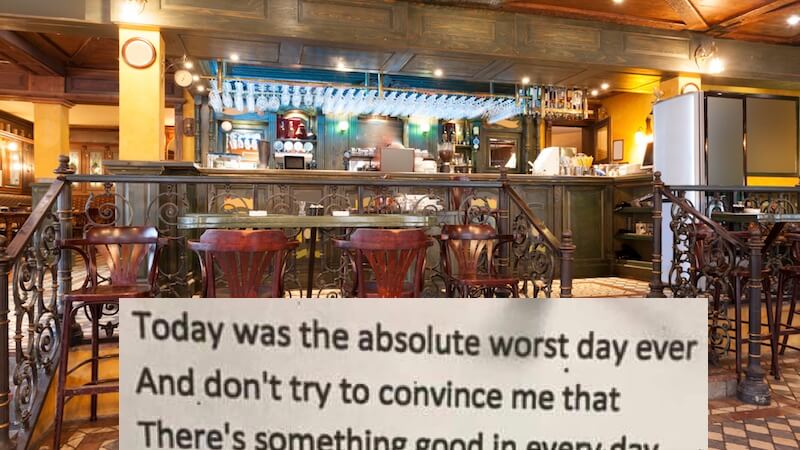 Today was the absolute worst day ever
And don’t try to convince me that
There’s something good in every day
Because, when you take a closer look,
This world is a pretty evil place.
Even if
Some goodness does shine through once in a while
Satisfaction and happiness don’t last.
And it’s not true that
It’s all in the mind and heart
Because
True happiness can be attained
Only if one’s surroundings are good
It’s not true that good exists
I’m sure you can agree that
The reality
Creates
My attitude
It’s all beyond my control
And you’ll never in a million years hear me say
Today was a very good day

(Now read from bottom to top.)

The poet is in Brooklyn; the bar in London

A Brooklyn teenager’s poem somehow made its way across the Atlantic Ocean to a bar in London, where it was printed and tacked up in a bar. When someone there took a photo of the paper and posted it on social media, it quickly made the rounds on the Internet.

The poem, “Worst Day Ever?,” seems to have originally been posted on PoetryNation by Chanie Gorkin, who describes herself as “an 11th grader at an all girls’ high school in Brooklyn, NY. She enjoys writing and music.” On first read, it presents a very gloomy tone, but a twist at the end casts the message in a new light.

It’s about seeing things in a new light.

It’s about the power of choice, choosing and changing our attitudes.

Having a very worst day is within our control and so is a very good day by choosing our attitude and looking for the good no matter what.  This reminds me of what Victor Frankl said – one who saw the worst, who saw evil and still claimed his power to choose.

“Everything can be taken from a man but one thing: the last of the human freedoms – to choose one’s attitude in any given set of circumstances, to choose one’s own way.”