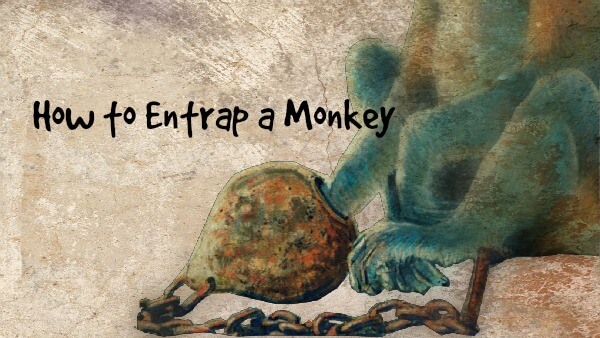 Way down on the South Sea island of Borneo, the natives go about catching monkeys in a very unusual way. Most of the monkeys are sold to zoos, so the hunters avoid using ordinary traps which can cause disfiguring injuries. Instead, they hollow out a football-sized coconut, leaving a hole in one end just big enough for a monkey to slip in its hand. Inside the hollowed-out coconut, the natives put delicious green bananas, the monkey’s favorite food. They screw a strong eye-bolt into the solid end of the coconut. Then they fasten a chain to the eye-bolt, and tie the other end of the chain to the roots of a nearby tree. The trap — for it is a trap — is almost ready. Just before they leave, the natives scatter more green bananas around the jungle clearing. Then they return to their villages.

When a troop of monkeys comes swinging through the rain forest, the sharpest-eyed among them will usually see the green bananas in the clearing. He’ll signal the troop to halt, and they’ll descend, jabbering and chattering, to scoop up their favorite food. When all of the freebies are gone, almost inevitably, one of them will pick up the baited coconut, put his hand through the hole in one end, and clutch the bananas inside with his fist. However, when he tries to pull out the delicious fruit, he quickly discovers that the hole in the coconut is too small for him to withdraw his banana-filled hand. All the monkey has to do to escape is open his fist and let go of the bananas. Then he can easily pull out his hand.

Alas, the greedy monkey almost never does the logical thing. He tries to carry off the coconut, but of course, it’s chained securely to a tree. He struggles, he screams, he rages, he foams, he tugs and pulls at the coconut until his wrist is raw and bleeding, and he himself is exhausted. When the natives come back next morning to check their trap, they find a battered, broken-spirited monkey who’s been caught by his own fist.

I want to yell at the monkey, “Just open your hand and let it go!” as if he could understand what I was trying to say to him.  But I realize I’m like the illogical monkey too.  I attach to so many things and when I’m not able to let them go they cause me to fuss and fume and be miserable.  “Let go.”  “Detach.”  “Surrender.”  Phrases that are common in the recovery movement.  But I want them to become more common in my life also.

Humans attach to a lot of different coconuts – jobs, addictions, possessions, relationships etc.  I’ve become aware lately about something I cling to that causes me to worry so much and live in fear – and that is “how.”   I’ve heard them called “the cursed hows.”  I have a lot of goals I want to accomplish, I have dreams I want to see fulfilled, but I don’t know exactly how to do it, or how make it happen.  I’m learning that it’s enough to keep on dreaming and just take the next logical step and choose not to worry about the “how” – “how will I get there.”  This makes life a lot more fun, kind of like playing.  And this all helps me make even more sense out of one of my favorite proverbs.

“Trust in the Lord with all your heart, don’t lean on your own understanding.  In all your ways, acknowledge Him and  he will direct your steps.”

So Bill – trust God for the dream or the goal, for life itself.  Don’t lean on your own understanding or try to figure out the “cursed hows”.  Acknowledge that God is leading and guiding and just take the next step and you’ll be directed and guided.   So I open my hands today to you God and my soul and I detach, surrender and simply let go.  Even in writing that I take a sigh of relief.  May I live that way more often throughout my life and this day.