Choosing to Dance with Mary 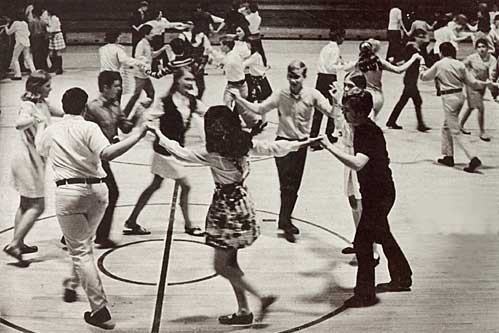 Choosing to Dance with Mary

“When I was in the sixth grade I was an all-American. I was smart, athletic, witty, handsome–especially with my Vaselined hair wave sweeping back from my forehead. And I was incredibly nice. Things went downhill fast later, but for this one year I had everything. Unfortunately, I also had Miss Owens for an assistant teacher. Miss Owens was a college girl who was practicing on us. She helped Mr. Jenkins, our teacher. Miss Owens also went to my church. She knew that even though I was smart and incredibly nice there was a thing or two I could still work on.

One of the things you were expected to do in grade school was to learn how to dance. My parents had some reservations about it, but since this was square dancing, it was OK. Every time we went to work on our dancing we did this terrible thing–and I mean it was terrible. I hope this kind of thing isn’t done any more. The boys would all line up at the door of our classroom, then, one at a time, each boy would pick a girl to be his partner. The girls all sat at their desks. As they were chosen they left their desks and joined the kid who honored them with his favor.

Here’s where Miss Owens comes in. Miss Owens took me aside one day and said: ‘Dan, next time we have dancing I want you to choose Mary.’ She might as well have told me to fly to Mars. It was an idea that was so new and inconceivable I could hardly believe it. You mean pick somebody other than the best, the prettiest, the most popular? You mean pick somebody other than Linda, Shelley or even Doreen? And then Miss Owens did a rotten thing. She told me it was the Christian thing to do.

I knew immediately I was doomed. I was doomed because I knew she was right. It was exactly the kind of thing Jesus would have done. In fact, I was surprised that I’d never seen a Sunday School flannel board that had ever said: ‘Jesus choosing the lame girl for the Yeshvva dance.’ It was bound to be somewhere in the Bible. I agonized. Choosing Mary would go against all the coolness I had accumulated. It wasn’t smart, it wasn’t witty, maybe it was nice, but even I didn’t want to be that nice.

The day came when we had to square dance, and I prayed secretly that God would work it out so that I would be last. Then, I could pick Mary because she’d be the only one left. No one would know, I would have honored Miss Owen’s request, I would have done the Christian thing to do and I would have gotten away with it.

You can guess where I was instead. For whatever reason, I was first in line. The faces of all the girls turned towards me, smiling. I looked at Mary and saw that she was only half-turned to the back of the room, her face staring down at her desk. Mr. Jenkins said, ‘OK, Dan, choose your partner.’ I remember feeling very far away. I heard my voice say: ‘I choose Mary.’

Never has virtue been rewarded so fast. I can still see her face undimmed in my memory. She lifted her head, and on her face reddened with pleasure and surprise and embarrassment all at once was the most genuine look of delight and even pride that I’d ever seen before or since. It was so pure that I had to look away because I knew I didn’t deserve it. Mary came up and took my arm, just like we’d been instructed, and she walked beside me, bad leg and all, just like a princess.

Mary is my age now. I never saw her after that year. I don’t know what her life’s been like or what she’s doing, but I’d like to think she has a fond memory of at least one day in sixth grade. I know I do.”

(In “Letters to My Children” by Daniel Taylor)

In John 15:16 Jesus says, “You did not choose me, I chose you.”  God doesn’t choose us begrudgingly or unwillingly, but enthusiastically.  So I love this story as a metaphor of being chosen by God and living in the delight of that feeling.  And here also is a ‘Simple Sunday Sermon” link about the thought of being chosen:  You are Chosen.