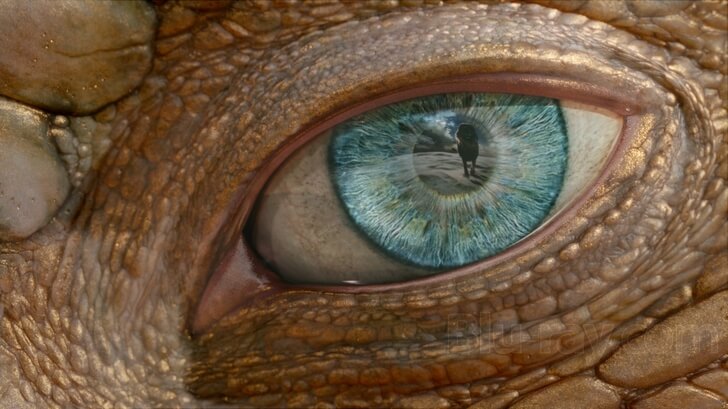 (In the book, “Voyage of the Dawn Treader” by C.S. Lewis, Eustace Scrubb comes upon a dragon’s lair and in trying to take the treasure, turns into a dragon himself. He eventually is able to communicate his predicament to his shipmates but realizes he is stuck like this forever – miserable and lonely. At this point Aslan appears and brings him to the edge of the water…)

“The water was as clear as anything and I thought if I could get in there and bathe it would ease the pain in my leg. but the lion told me I must undress first. Mind you, I don’t know if he said any words out loud or not.

I was just going to say that I couldn’t undress because I hadn’t any clothes on when I suddenly thought that dragons are snaky sort of things and snakes can cast their skins. Oh, of course, thought I, that’s what the lion means. So I started scratching myself and my scales began coming off all over the place. And then I scratched a little deeper and , instead of just scales coming off here and there, my whole skin started peeling off beautifully, like it does after an illness, or as if I was a banana. In a minute or two I just stepped out of it. I could see it lying there beside me, looking rather nasty. It was a most lovely feeling. So I started to go down into the well for my bathe.

But just as I was going to put my feet into the water I looked down and saw that they were all hard and rough and wrinkled and scaly just as they had been before. Oh, that’s all right, said I, it only means I had another smaller suit on underneath the first one, and I’ll have to get out of it too. So I scratched and tore again and this underskin peeled off beautifully and out I stepped and left it lying beside the other one and went down to the well for my bathe.

Well, exactly the same thing happened again. And I thought to myself, oh dear, how ever many skins have I got to take off? For I was longing to bathe my leg. So I scratched away for the third time and got off a third skin, just like the two others, and stepped out of it. But as soon as I looked at myself in the water I knew it had been no good.

The the lion said – but I don’t know if it spoke – ‘You will have to let me undress you.’ I was afraid of his claws, I can tell you, but I was pretty nearly desperate now. So I just lay flat down on my back to let him do it.

The very first tear he made was do deep that I thought it had gone right into my heart. And when he began pulling the skin off, it hurt worse than anything I’ve ever felt. The only thing that made me able to bear it was just the pleasure of feeling the stuff peel off. You know – if you’ve ever picked the scab of a sore place. It hurts like billy-oh but it is such fun to see it coming away.

Well, he peeled the beastly stuff right off – just as I thought I’d done it myself the other three times, only they hadn’t hurt – and there it was lying on the grass: only ever so much thicker, and darker, and more knobbly-looking than the others had been. And there was I as smooth and soft as a peeled switch and smaller than I had been. Then he caught hold of me – I didn’t like that much for I was very tender underneath now that I’d no skin on – and threw me into the water. It smarted like anything but only for a moment. After that it became perfectly delicious and as soon as I started swimming and splashing I found that all the pain had gone from my arm. And then I saw why. I’d turned into a boy again. You’d think me simply phoney if I told you how I felt about my own arms. I know they’ve no muscle and are pretty mouldy compared with Caspian’s, but I was so glad to see them.

After a bit the lion took me out and dressed me – (with his paws?) – Well, I don’t exactly remember that bit. But he did somehow or other: in new clothes – the same I’ve got on now, as a matter of fact. and then suddenly I was back here. Which is what makes me think it must have been a dream.”

I recently heard a leader in the church talk about the need for pastors to have “thicker skin.”  He said that many pastors are people pleasers and conflict avoiders and that it’s important to have thick skin.  I can raise my hand for both parts – I’m a people pleaser and I’m often afraid of conflict and would like to avoid it.  But about dealing with conflict by having a “thick skin,” I couldn’t disagree more.  I’m finding in my own life that the answer isn’t having a thicker skin, but a a bigger heart.  A bigger, wide open heart of love.  I don’t want anymore armor.  I don’t want a calloused heart.  That is my fear and ego talking, thinking it has to defend and protect itself.  I want a new heart, a living heart, an open heart not afraid to break, to feel, to live and speak the truth and hear the other.  As Ezekiel says, “O God take this heart of stone from me and give me a heart of flesh.”  I want to learn to love with a wide open heart, even with others who don’t agree with me, who may dislike me, not in order even to gain their approval that I so often want, but to come alive myself to life as I learn to love like that.  And just to keep on learning.

Prayer:  Change me O God, tear the callouses from my heart and the armor from my life, undress me and then dress me again, that I may live wide open in love like you.  I am well armored and thick.  Undo me, tenderize me, throw me in the water and clothe me with yourself – with compassion, kindness, gentleness which is my true identity and power in you – that I might come alive to life and to love and to all that is you.  Make me a new creation where the old is gone and going and the new has come and is coming.  You can make all things new – including me.