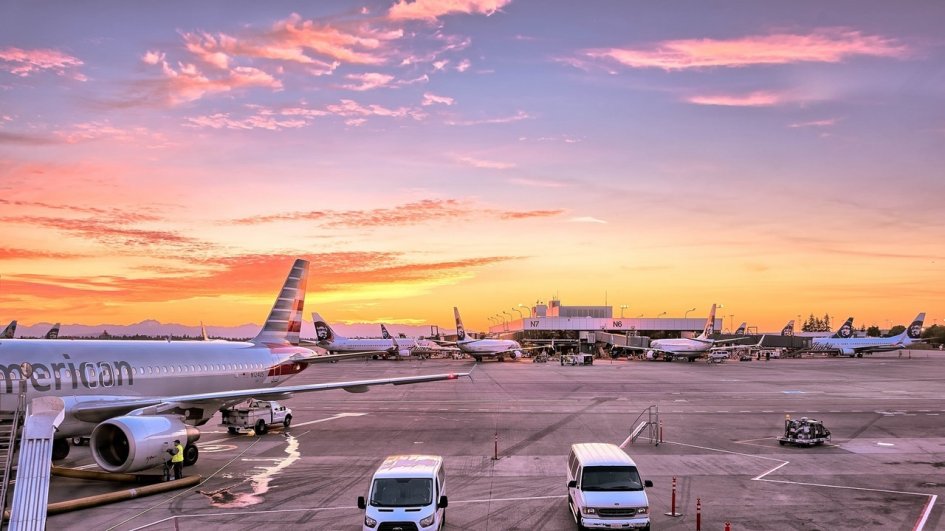 At gate C22 in the Portland airport
a man in a broad-band leather hat kissed
a woman arriving from Orange County.
They kissed and kissed and kissed. Long after
the other passengers clicked the handles of their carry-ons
and wheeled briskly toward short-term parking,
the couple stood there, arms wrapped around each other
like he’d just staggered off the boat at Ellis Island,
like she’d been released at last from ICU, snapped
out of a coma, survived bone cancer, made it down
from Annapurna in only the clothes she was wearing.

Neither of them was young. His beard was gray.
She carried a few extra pounds you could imagine
her saying she had to lose. But they kissed lavish
kisses like the ocean in the early morning,
the way it gathers and swells, sucking
each rock under, swallowing it
again and again. We were all watching–
passengers waiting for the delayed flight
to San Jose, the stewardesses, the pilots,
the aproned woman icing Cinnabons, the man selling
sunglasses. We couldn’t look away. We could
taste the kisses crushed in our mouths.

But the best part was his face. When he drew back
and looked at her, his smile soft with wonder, almost
as though he were a mother still open from giving birth,
as your mother must have looked at you, no matter
what happened after–if she beat you or left you or
you’re lonely now–you once lay there, the vernix
not yet wiped off, and someone gazed at you
as if you were the first sunrise seen from the Earth.
The whole wing of the airport hushed,
all of us trying to slip into that woman’s middle-aged body,
her plaid Bermuda shorts, sleeveless blouse, glasses,
little gold hoop earrings, tilting our heads up.

I love this poem and what Roger Hudson says about this it.  I  couldn’t say it better myself.

“This poem is irresistible to my mind and ear, the way the words and the lines cascade down the page to end finally with an upturned face ready and open for a kiss to end all kisses. The rich, triumphant, and utterly unself-conscious images of sensual love at a certain age, in a public place, before the eyes of a gathering audience are an inspiration by example to throw away all cares about how others see us, to let our love and our passion be intrinsic to who we are, no less hidden than our appreciation for fine wine or delight in a sunset…This couple savors their love right there in the arrival lounge, and they seem ready to camp out there for the night. Their love spreads a redemptive balm over the whole building, and also over the reader, who is invited to join vicariously in their joy.”

A prayer:  O God change me and help me to love like someone who just got of the ICU with a new lease on life and who sees life and those he loves with wonder, amazement and gratefulness and expresses it to them.