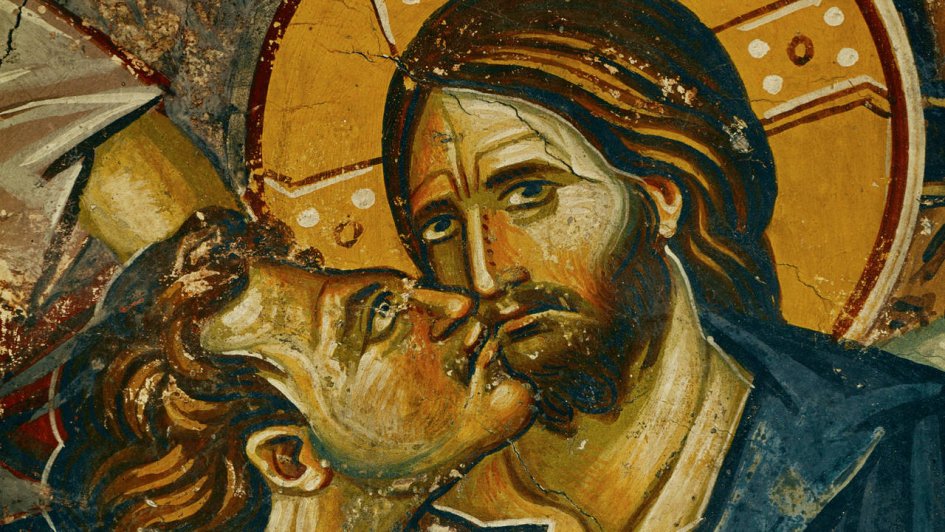 Throughout the centuries, we’ve all been Judas.  Betraying God in a multitude and myriad of ways.  If there is no grace, forgiveness and hope for him, there is none for any of us.  Based on “He descended into hell…” here is a legend about the rest of the story…

Nobody can be sure, of course, why Judas sold Jesus out, although according to John’s Gospel, he already had a reputation for dipping into the poor box from time to time, so the cash may have been part of it. If, like the other disciples, he was perennially worried about where he stood in the pecking order, he may also have been reacting to some imagined slight. Maybe he thought his job as treasurer to the outfit was beneath him. Another possibility is that he had gotten fed up with waiting for Jesus to take the world by storm and hoped that betraying him might force him to show his hand at last. Or maybe, because nothing human is ever uncomplicated, something of all of these was involved. Anyway, whatever his reasons were, the whole thing went sour for him soon enough.

Slipping out of the Last Supper before the party was over, he led the Romans to the garden that he knew his friends were planning to adjourn to afterward and said to lay low till he gave the signal. It was dark by the time the others showed up, and maybe for fear that he might scare them off if he used any other method, the way he showed the soldiers which was the one to jump was by kissing him. That was all he’d been paid to do, and as soon as he’d done it, there was no earthly reason why he couldn’t have taken off with his laundered cash and found a place to spend it. But when the time came, he wasn’t in the mood.

There are several versions of what he did instead, of which the most psychologically plausible seems to be that he tried to give the money back to the ones who’d given it to him and went out and hanged himself. This time there doesn’t seem to be any ambiguity about the motive.

There is a tradition in the early church, however, that his suicide was based not on despair but on hope. If God was just, then he knew there was no question where he would be heading as soon as he’d breathed his last. Furthermore, if God was also merciful, he knew there was no question either that in a last-ditch effort to save the souls of the damned as God’s son, Jesus would be down theretoo. Thus the way Judas figured it, hell might be the last chance he’d have of making it to heaven, so to get there as soon as possible, he tied the rope around his neck and kicked away the stool. Who knows?

In any case, it’s a scene to conjure with. Once again they met in the shadows, the two old friends, both of them a little worse for wear after all that had happened, only this time it was Jesus who was the one to give the kiss, and this time it wasn’t the kiss of death that was given.