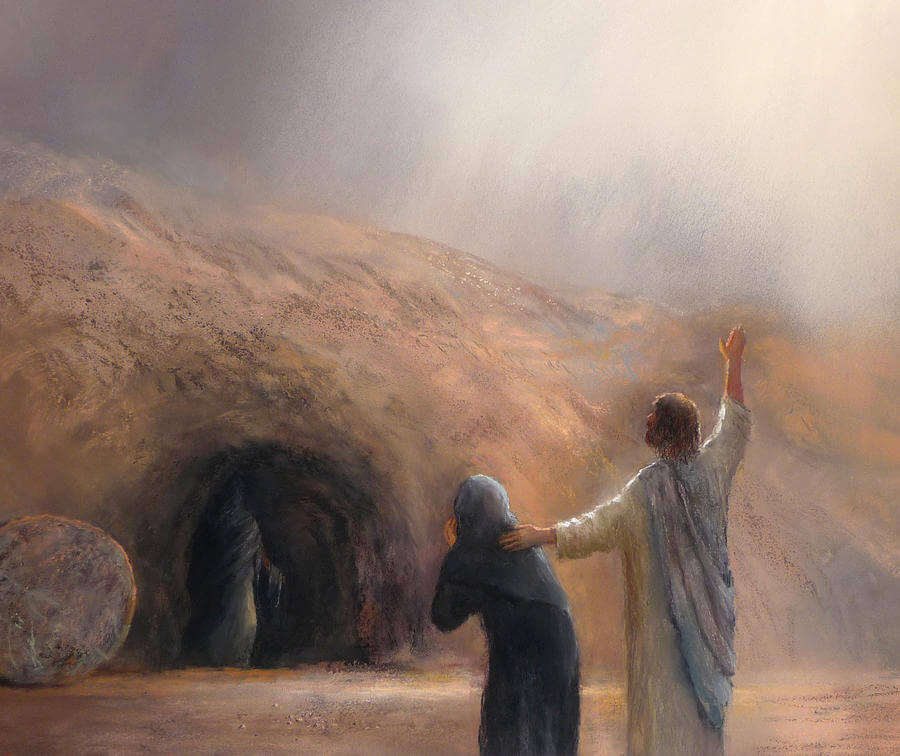 In a sermon years ago, the great Southern preacher, John Claypool talked about a little known play by Eugene O’Neill entitled, “Lazarus Laughed.” In this play, O’Neill gives us a glimpse of the power of life without fear. The play begins, where the Biblical story of Lazarus leaves off presuming that the audience is very familiar with the biblical story. “Lazarus was dead and buried for four whole days when Jesus came to the village of Bethany, had the stone rolled back from the tomb, and gave Lazarus back the gift of life.

As the curtain goes up, Lazarus is seen stumbling out of the dark, blinking into the sunlight. After the grave clothes are taken off of him, Lazarus begins to laugh a gentle, soft laugh; nothing bitter, nothing derisive, an embracing, astonishing, welcoming sound.

The very first thing Lazarus does is to embrace Jesus with gratitude. Then Lazarus begins to embrace his sisters Martha and Mary and then the other people who are gathered about in astonishment. Lazarus has a very clear look in his eye, nothing far away. It’s as if he’s seeing the world about him for the very first time. He reaches over and pats the earth very affectionately. He looks up at the sky, at the trees, at the neighbors as if he had never seen them before, as if he is overwhelmed by the incredible all rightness of the way everything is. The very first words Lazarus utters are the words, “Yes, yes, yes,” as if to embrace reality as it is being discovered all over again.

In the play, Lazarus makes his way back to his house and the whole village of Bethany is awash with wonder. Finally somebody gets the courage to ask what was on everybody’s mind. “Lazarus, tell us what it’s like to die. What lies on the other side of this boundary that none of us have crossed?”

Then Lazarus says, “The One that meets us there is the same generosity that gave us our lives in the beginning, the One who gave us our birth. Not because we deserved it but because that generous One wanted us to be and therefore there is nothing to fear in the next realm.”

“The grave is as empty as a doorway is empty. It is a portal through which we move into greater and finer life. Therefore, there is nothing to fear. Our great agenda in this part of life is to learn to accept, to learn to trust. We are here to learn to love more fully. There is only life. There is no death.”

“The grave is as empty as a doorway is empty. It is a portal through which we move into greater and finer life.”

And with that Lazarus’ laughter began to fill the whole house in which he was staying.

Then, Lazarus goes back to his daily tasks, but there is something different. He is calm and not anxious anymore. He is no longer vulnerable to that fear that diminishes the vitality of life. The house where he lives became known as the “house of laughter” and night after night, you would hear singing and dancing. And the spirit of this one who had come back with this message that there is nothing to fear began to spread throughout the whole little village.

The quality of work began to rise all over Bethany. People began to live in harmony and more generously with one another. The conflicts of old died down. Joy settled over this whole little community because someone had come back saying that there was finally nothing to fear.

“There is nothing to fear.”

But, not everyone in Bethany was pleased with this turn of events. The Roman authorities were quick to sense that this one who had lost his fear of death was, in fact, a great threat to the kind of control that they liked to maintain. You realize, of course, that the key to intimidation is always that incipient fear of death. The way a tyrant holds someone down is by always suggesting that if they don’t obey then something terrible, like death, would be used against them. One of the cruelest of all the Roman emperors, a man named Caligula, used to say, “Crosses and corpses are so educational. Let the scum see their blood or the blood of some of their kin and it will so cower them in fear that then we can rule them.”

So the Romans were task masters at intimidation and Lazarus represented a real threat.How do you intimidate someone who is no longer afraid of death? In the play, the Roman authorities move in on Lazarus. They tell him to quit laughing. They tell him his house can no longer be the place for parties and all he does is to laugh all the more. He says clearly, “The truth is, there is nothing you can do to me. There is no death. There is only life.”

“There is no death. There is only life.”

The Romans were so frustrated that they arrest him. They take him to Caesarea where he appears before a higher official, but he’s not able to do anything with Lazarus. And so, Lazarus is taken all the way to Rome. The play ends as Lazarus stands face to face with the Roman emperor. Here is the man who is allegedly the most powerful of all on the earth. He says to Lazarus, “You have a choice. You will either stop this infernal laughter right this minute or I’m going to have you put to death.” And Lazarus continues to laugh. He says to the emperor, “Go ahead and do what you will. There is no death. There is only life.”

The play ends with a man who is no longer afraid of death actually being more powerful than the one who ruled all of the Roman empire.