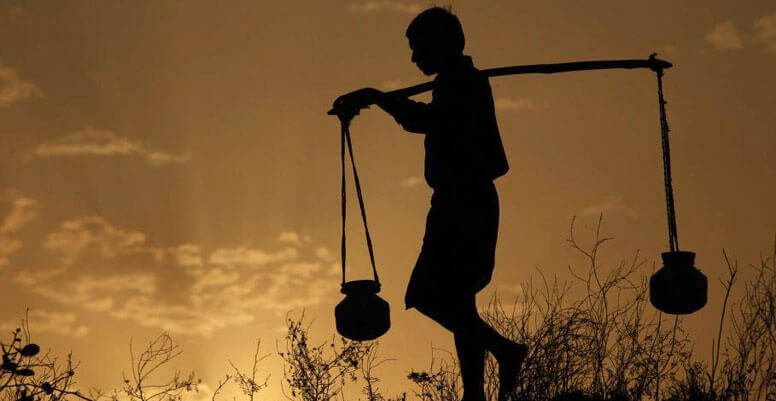 A legend tells of a man who used to carry water every day to his village, using two large pots tied on either end of a piece of wood, which he placed across his shoulders.

One of the pots was older than the other and was full of small cracks; every time the man came back along the path to his house, half of the water was lost.

For two years, the man made the same journey. The younger pot was always very proud of the way it did its work and was sure that it was up to the task for which it had been created, while the other pot was ashamed that it could carry out only half its task, even though it knew that the cracks were the result of long years of work.

So ashamed was the old pot that, one day, while the man was preparing to fill it up with water from the well, it decided to speak to him.

We all, at some point, grow old and acquire other qualities, and these can always be turned to good advantage.

“I wish to apologize because, due to my age, you only manage to take home half the water you fill me with, and thus quench only half the thirst awaiting you in your house.”

The man smiled and said:

“When we go back, be sure to take a careful look at the path.”

The pot did as the man asked and noticed many flowers and plants growing along one side of the path.

“Do you see how much more beautiful nature is on your side of the road?” the man remarked. “I knew you had cracks, but I decided to take advantage of them. I sowed vegetables and flowers there, and you always watered them. I’ve picked dozens of roses to decorate my house, and my children have had lettuce, cabbage and onions to eat. If you were not the way you are, I could never have done this.”

“But we have this treasure in jars of clay to show that this all-surpassing power is from God and not from us.”  2 Cor. 4:7

“Everything has a crack in it, that’s how the light gets in.”  Leonard Cohen

“The wound is the place where the light enters you.”  Rumi

When she was young, Chang Chang made two pots to carry her water, and these she hung upon a pole she could carry over her shoulders. She painted one pot blue and the other red, and on each pot she painted flowers. Chang Chang loved flowers. And she loved her pots.

For some years she carried her pole down the hillside and collected water. Afterward she climbed the hill. She was strong and able, though she was growing older. And as time passed, the pots, too, grew old.

One day, as Chang Chang prepared to place the pole over her shoulders, she noticed the blue pot had a slender crack along its side.

She ran a finger over the crack and sighed, “My poor little pot.”

For a few moments Chang Chang studied the crack. “Will you hold my water?” she whispered. But she decided she could still use the pot. As always she carried both pots down the hill and filled them with water to the very brim. By the time she reached the hilltop, the pot with a crack was half-empty, but this still left her plenty of water for doing the laundry.

For the next two years, Chang Chang carried those pots down the hillside every morning. When she reached the stream, she filled them to the brim, and afterward she walked back up the hill, balancing the pole across her shoulders. By the time she reached the house, the cracked blue pot was only half full — just enough for the laundry.

Each day Chang Chang examined the crack, and though it was growing a little longer, she decided all was well. What she didn’t notice was that the poor blue pot was miserable. Each time it drank from the stream, it secretly hoped that this day all the water would stay inside its belly, but each day when they reached the top of the hill, the pot knew it had failed. The blue pot glanced at the red pot and saw water filled to the top, and the blue pot began to feel desolate.

“Stop your whining,” the red pot answered. “No one wants to hear from a pot.”

One day the blue pot woke and felt its crack beginning to expand. It was certain Chang Chang would soon decide to throw it away. Soon it would be no use to anyone for anything.

That morning, as Chang Chang climbed the hill, she was startled to hear a voice she had never heard. “Chang Chang,” the voice said, “throw me away. I’m no good for anyone or anything.”

Chang Chang stopped and looked around, wondering who could be speaking to her. “Hello?” she called down the hill.

But the voice that answered was very near. “I’m right here,” said the blue pot, swinging this way and that to get Chang Chang’s attention. “I’m your pot. The pot you made with your own two hands. The pot that has served you so well all these years. But I see now my time is finished. The crack in my side has made me useless. When you carry me up the hill, I spill all my water. I’m no good!”

For a long moment Chang Chang stood very still, amazed that her pot had spoken. “Is that you?” she whispered, looking close. “Are you speaking, dear pot?”

Chang Chang was overjoyed to know her pots were as full of life as she had always imagined, but she was sad to hear such sorrowful words. “But pot, you don’t understand,” she said. “You haven’t been paying attention. Look around.”

Chang Chang pointed to the path beside them, the path up the hill, and for the first time the pot stopped looking inward and instead looked out. On the right side of the hill the pot noticed beautiful flowers growing in abundance — poppies and peonies and chrysanthemum and narcissus and citron. A ribbon of color edged the path.

“And look at the other side of the hill,” Chang Chang said.

The pot glanced to the other side and saw it was bare.

“I’ve always known about your flaw,” Chang Chang said. “And so I planted seeds on your side of the path, and every day you water them and add more beauty to the world.”

The blue pot was overjoyed. All its sadness was gone. It understood, just as Chang Chang always had, that every being has its unique flaws. And it is our little quirks and faults that make us and the world so interesting.

Source: Amy Friedman and Meredith Johnson
Tell Me a Story